The Pain of Trekking

Tip of the top of the hill is not all
Lonely, the mind isn't willing to be that tall
Descend, descend and descend, we're with all
Hilarious, jubilant, exulting, all at our fall

On the plains, back from the hill, we're in pain
First on the feet, up on the knee, up is the pain
On the hip, on the rib, in the chest, we're in pain
All joints, all nerves, all cells, it's all pain

Be true trekkers, mountaineers in real life.
at November 20, 2016 No comments:

Mathematics of the Blind

How does a blind know the other person is blind or not? One of the toughest explorations of humankind is the exploration for the truth. Human search for food ended with finding food. In some way, it is parallel to what other living beings also do. Hunger for food brings human beings, animal and plants on the same platform. They work towards getting good, sometimes good food. As a rational animal, human beings went further ahead. They searched for the truth behind it. They found that there is much more in the truth.

Among the three types of living beings, human beings and animals are superior to plants because of their capacity to change their positions. They find better positions, in the face of threats and sometimes for comfort. Hence we may say that plants live in the first dimension.  Human beings are superior to animals because of their capacity to change their positions in thinking. Though animals think, their thinking is a very static thinking. Hence, we may say that animals live in the second dimension. They live according their instinct. Human beings live in the third dimension. They have life. They can move. They can remember the past and dream about the future. They can imagine.

Many say, “Mathematics is the study of anything that has reason.” Mathematics is about recognizing patterns in the world and contributing suggestions for its repetition and improving.  In establishing the claims of what is right and what is good, mathematicians use a technique called “Proof.” In fact, everyone with rationality does proving, in many different ways. Hence, in general everyone is a mathematician. However, academic mathematicians do more documented proving. There are various methods of Proof.

One without the capacity to see things using one’s own eyes is termed as a blind. Of course, blindness is not a hindrance to reasoning. Hence, a blind person also does proving. But, can a blind person use a visual proof? To be precise, we come back to the initial question, “how does a blind know the other person is blind or not?” One can always bluff the blind by pretending to be blind or not. Here comes a beautiful mathematical proof method, named as “Zero Knowledge Proof.” It is illustrated in the case a blind person (B) who tests the blindness of another (A).

B has two identical marbles of different colours. 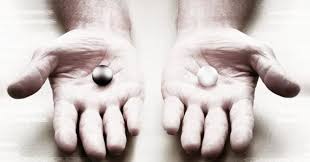 B knows that the marbles are of different colours. However, B cannot distinguish them by their colours. B holds the marbles in either of the palms. B asks A to identify the colours of the marbles. There is a possibility that A might come with the two colours correctly. But, B is still not sure if A is truthful. Hence, B keeps swapping the marbles quickly for some time between the palms with the perfect knowledge of the movement of the marbles. If A is blind, A has no clue whether the marble is exchanged or not. B then asks A to identify the location of the different colours. This procedure is repeated a couple of times more. If A is not blind, then A can never deviate from the initial identification of colours of the marbles.

O my beloved ones!
You pinned me
To a night-less day
To a sleepless night
With such a thoughtful gift
Which is the second best gift
In the last eighteen months.
No wonder, the first,
O my beloved ones,
Who else?
What else?
Other than you,
ALL OF YOU.

On the day after,
When paper money became just paper
When a dump triumphed over the wise
You pinned me
To priceless papers of wisdom
Which no one can ever demonetise
To countless numbers on papers
Which no dump can ever triumph over...

With the fullest sense of its humblest
Exhibit ever possible,
Permit me to use the word, THANKS.

A forty thorny fence
An effort of defence
By the thorny thorns
Of the thrown thrones
On my deadly head
By the dread wicked
Bid them good bye
Brought me good sigh
at November 09, 2016 2 comments:

Develop a skeleton for each day

One has to develop one's own habit of writing. One important  characteristic of habit is that one may not realize what one does in a hab...

Glory to the Sliva of our salvation! Praise to Eeso Mishiha who redeemeed this world!