The Prodigy that was Shakuntala Devi 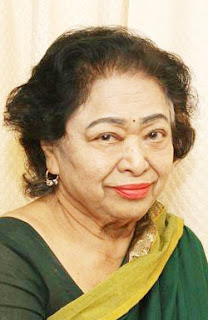 Shakuntala Devi was the best known face of popular Mathematics in India. She was renowned for her mindboggling calculations.  Indian Mathematics was synonymous with two names late Srinivasa Ramanujan and the other being Shakuntala Devi herself.  While Ramanujan is associated with the pre-independence period, Shakuntala Devi flowered in the post-independence India.
Ramanujan was famous for his longstanding contribution to the modern Theory of Numbers, including the methodology to estimate the accurate value of Pi. On the other hand, Shakuntala Devi, who lacked formal education, attempted to eradicate ‘Arithmophobhia’ or the fear of numbers among the masses.  Her public performances sought to convey the message that Mathematics is fun and not necessarily esoteric.

When Shakuntala Devi established herself through the 1960s and 1970s the television era did not exist   in the country. The only medium available to her was public performances at schools, colleges or clubs.      Shakuntala Devi was inherently gifted with the power of calculation that started as a child through association with her father who performed card tricks. She gradually mastered the art of Mind Dynamics to astonish audiences worldwide with her almost instantaneous calculations of complex Mathematical operations. The lady was not a qualified classical Mathematician in the true sense of the term, considering she did not focus on development of Mathematical theories like CR Rao or SR Varadhan. Instead she concentrated solely on her amazing ability to calculate with super speed.

On 18 June 1980 at the Imperial College of London, Shakuntala Devi outdid the then fastest computer to multiply two thirteen digit numbers with each other. This earned her a coveted place in the Guinness Book of World Records.    It would be relevant to mention that the techniques that Shakuntala Devi used to wow the world with her superhuman skills were gleaned from the Atharva Veda.  These included:  ‘modular ‘arithmetic to figure out the day of any given date to find the nth root of any integer power; besides, movements of celestial bodies aimed to generate astrological predictions. Shakuntala Devi through her public performances was able to restore some of the glory of Vedic Mathematics.
The fact that Shakuntala Devi did not go to school never deterred her ability to grasp the nuances of numbers along with their permutations and combinations. Her father who was born in to a family of traditional priests had the courage of his conviction to pursue his passion as a vocation and became a circus artiste. This resulted in financial instability which hampered Shakuntala Devi’s formal schooling. Despite this disadvantage, she authored a dozen odd books on Arithmetic skills and Mathematical puzzles which are well received across all age groups and even beyond Indian shores.
Clearly her life suggests that learning is as important as teaching.  Otherwise the lady applied her mathematical capabilities to Astrology in an era when there were no computers. This helped her become a celebrity astrologer and earn some wealth.

Clearly Shakuntala Devi possessed a God- given gift that coupled with her circumstances nurtured her capabilities to calculate to flourish over time. To that extent, she was born with mathematical abilities and lends credence to the thinking that Mathematicians are born and not made. Interestingly Shakuntala Devi’s birth and death, from a mathematical viewpoint have mystical significance. She was born in November 1929 and died in April 2013 aged 83 years. To a Mathematician these numbers 19, 29, 2, 13 and 83 are all prime numbers --- the building blocks of Counting Numbers.
Shakuntala Devi was a unique individual and India’s gift to the world of Mathematics. Her life serves as an inspiration to one and all. It sends the message of the importance to identify one’s hidden talents and thereafter nurture them irrespective of one’s circumstances or grooming.
at December 06, 2016

Develop a skeleton for each day

One has to develop one's own habit of writing. One important  characteristic of habit is that one may not realize what one does in a hab...

Glory to the Sliva of our salvation! Praise to Eeso Mishiha who redeemeed this world!